This trip is so fantastic, every day is a new adventure. However, the journey is so broad in scope that even I have to break it down into chunks, or categories, in order to write in my journal. Otherwise, I think to myself, where do I begin??

Some of the areas that this journey embraces are the wildlife, geology, geography, paddling, challenges, and social interactions (the awesome people I meet along the way).  Because I want to capture all of the various aspects of each and every bend in the river, I have accumulated numerous photos to help document my experiences. Here is just a taste of this short section of my trip.

On June 1, I took off from Fort Benton after an enjoyable stay. I knew it would be an easy paddle to Coal Banks Landing, a launching point into the Upper Missouri Breaks National Monument. As with any day, though, I’m not always sure where will campsite will be for the night.

Tim was surprised, and somewhat startled, to find this, umm, artifact imbedded in the beach.

I have fond memories of this campsite, despite the muddy beach, because of the 70’s music they were playing on the radio. Those were the days when the world open wide, and the anticipation of what could be was scintillating.

Further down I stopped at the Virgelle Ferry. An Indian man visiting America happened to be there and wanted to ride the ferry across and back. He asked me if I wanted to go, so I said, “sure”!

I arrived in Coal Banks after just a few hours the next day. Dominique Liboiron was coming to visit me there, since the location was close to his home in Saskatchewan, Canada. Last year, Dominique paddled from Saskatchewan to New Orleans in honor of his uncle who died of heart disease age the early age of 42. Dom carried his ashes to disperse in New Orleans, a city his uncle fell in love with.

It poured rain while he was there. He stayed two nights. One day we worked on a plan to get his canoe in Canada so he could paddle with me in the Breaks. Unfortunately, logistics proved to be too complicated, especially since James Kipp Recreation Area closed down due to flooding. So we went to Virgelle Landing and Fort Benton to have fun.

Once we determined that it was too difficult to organize a shuttle for Dominique, we decided to play tourist in Fort Benton. Dominique has wanted to go there for many years and, well, I was happy just to go with Dominique. He is such great company. We had a blast! 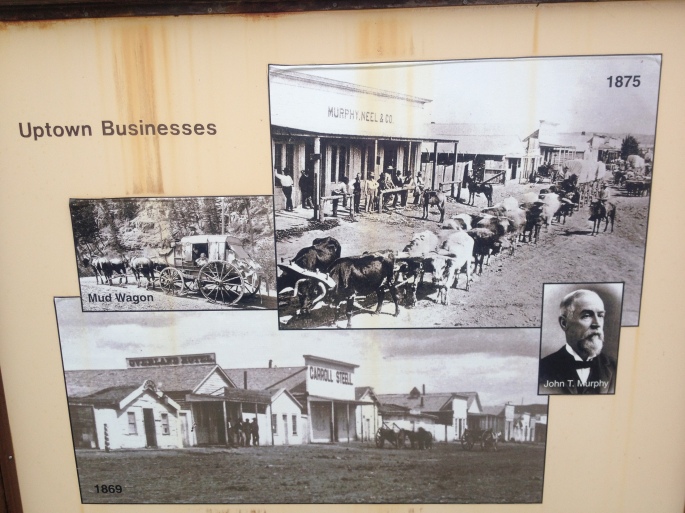 We stoped for lunch at the Palace Bar, where we met Sandy bartending. I dropped Dave Miller’s name,(the author of The Complete Paddler) and she remembered him, and apparently took good care of him. “I let him take a shower at my house.” When I mentioned that I hadn’t had a shower in a week, she insisted I go to her house and take one.  Thank you, Sandy! I will never forget your sweet heart.

After I went to Sandy’s house and took a shower, we stopped at the Missouri Breaks Interpretive Center. Unfortunately, they closed in five minutes, but I think we made the best of the situation.

The senior Boy Scouts had come to camp during the rainstorm. The camp hosts, Bub and Tinker Sandy were incredibly accommodating for all of us, letting the boy scouts stay in the visitor’s center, and letting Dominique set up his tent on the porch. By the time the weather let up and we all were ready to launch, we had become friends. Finally, it was time to enter the Upper Missouri River Breaks National Monument, a moment for which I had been waiting a long time.

Onward to the White Cliffs on June 4. I will try and have something posted in the next few days. I have a White Cliffs photo album posted on my Facebook Expedition page, if you want to check that out now.

I apologize for the delay in posts. I’m paddling a 178-mile lake right now, Lake Sakakawea, and a 230-mile lake coming up, Lake Oahe. I am currently at Dakota Waters Resort campground taking a refresh day (shower and laundry), and should be at the dam tomorrow or the next day.  Hurray!

Please see my Facebook page, LoveYourBigMuddy Expedition, for current photos and updates. You do not need to have an account to view the page, it is accessible to the public. I can upload straight from my iPhone and it is much easier, however, this blog helps to organize and document the journey. I have not forgotten you!

Do what you love, and love what you do.

You CAN do it!