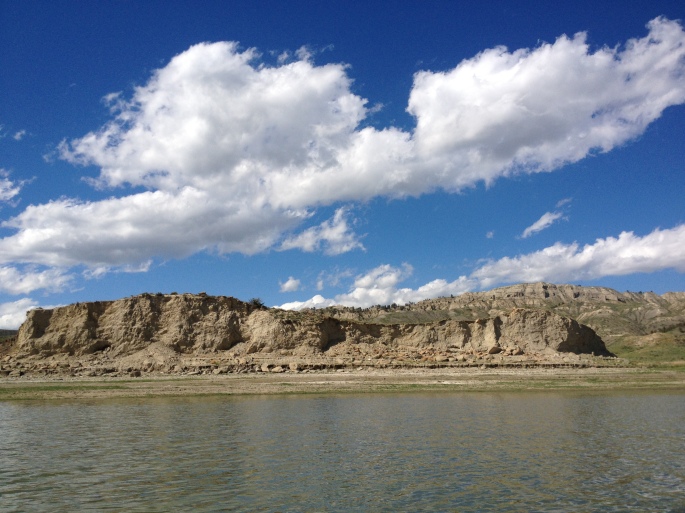 I paddled ten hours and 48 miles to get around UL Bend on Fort Peck Lake. I woke in the middle of the night and took some Advil. My muscles were stiff. It hurt so good. I felt like I had accomplished a lot by travelling so far. Now I would have to deal with the lake that I had heard so much about, and had been warned about by so many, friends and strangers: “Be safe through Fort Peck!! No big crossings unless way before 8AM!  You need to take advantage of the lake telling you it’s safe to go…not when YOU say it’s safe to go. Watch for quicksand!!”  Or, “Fort Peck is a very dangerous lake. Motor boats get swamped out there. The waves can come up fast. Don’t get caught out in the middle of the lake. People die on this lake.”  Gee whiz, people.  I wish I could enjoy the ride more instead of worrying about making unsafe decisions or passages across the lake. My journal reads, “I need to stop wondering if I’m making the right decision and just trust my judgment. I can SO do this!” 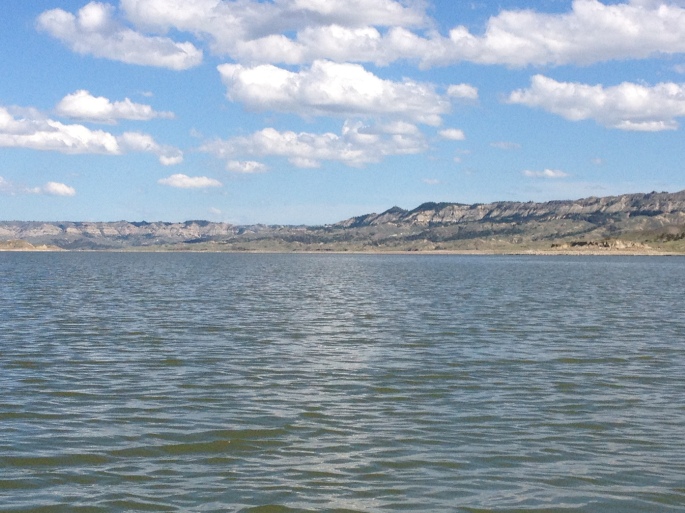 I was more concerned with the possibility that there might be mountain lions around.  I think I saw mountain lion tracks. Or, maybe they were coyote or wolf tracks, not sure. In hindsight, probably coyote, or racoon, or even badger. I had a little Montana Survival booklet with me. That was a really good purchase for five bucks. The nail imprints in the tracks indicated they were more likely the tracks of a badger, racoon or fox.

That very night, after I was zipped up in my tent, some animal made a loud noise right around dusk just outside my tent. Holy mackerel! It was a honk, cough, yell, growl, screech, or something, I don’t know what.  “Stay calm,” I told myself. “What do you need to do to survive?”  I took the safety off of my bear spray, got my buck knife out, grabbed my machete, and put my whistle around my neck.  I was hoping it was not a mountain lion. This area just seemed so mountain lion-ish with the desolation and rocky mountains all around. I also had my bottle of Advil next to me as I was preparing to down a couple to prevent stiff and sore muscles that night. I know, I’ll shake this bottle of pills and the animal outside will surely be startled, not having a clue what that noise is. I shook the bottle so it was loud and annoying. I heard the noise again, along with a couple of hoof stomps, and then it was quiet. My final deduction was that the animal was an elk. It was not a deer, but something similar that I was not familiar with. I’m sure it was an elk, or maybe an antelope. I was camped at their water hole, no doubt.

I was ready to knock out another 10-hour day. The weather report was calling for NE/East winds and some weather rolling in from the Pacific Northwest. Darn! I was loving all that sunshine and glassy water. I traveled up the North-South arm and reached the East-West body of the lake. The winds were indeed blowing at me. I would have to wait. There were whitecaps everywhere. I decided to hike around and take some pictures. As it turned out, I set up my tent just before a thunderstorm rolled through. I would be here until tomorrow. 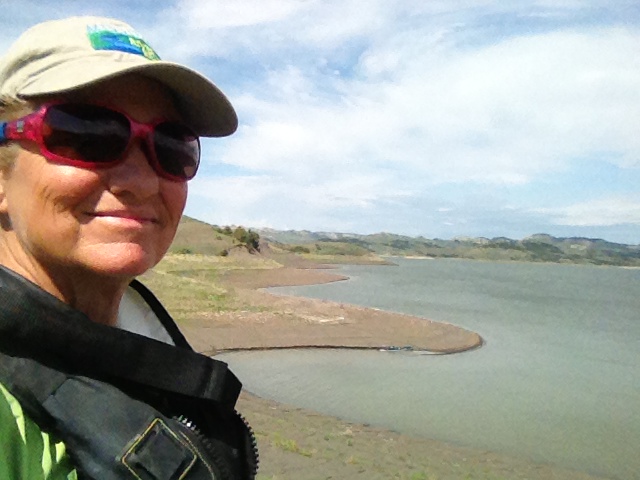 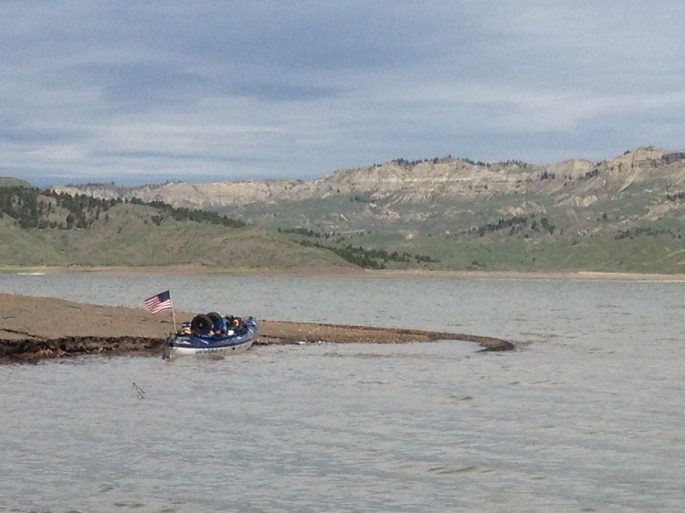 I would not paddle any more big 10-hour days on Fort Peck Lake. Winds blew every day. I paddled some mornings, and even some afternoon and evenings. I was comfortable at one spot where I landed, mainly because there was no mud, but it was also a very beautiful cove, and I was ready to wait out a big electrical storm forecasted and coming my way. However, the winds layed down unexpectedly and the wind advisory got cancelled. I wanted to stay put but I knew if winds were calm I needed to paddle. I packed up.

I made some progress, but was NOT pleased with my camp that night, the camp at which I was forced to ride out the predicted electrical storm, which was severe. I was exposed inside a bay that was treeless and low lying, and extremely muddy. This was, literally, the low point of my Fort Peck Lake experience. 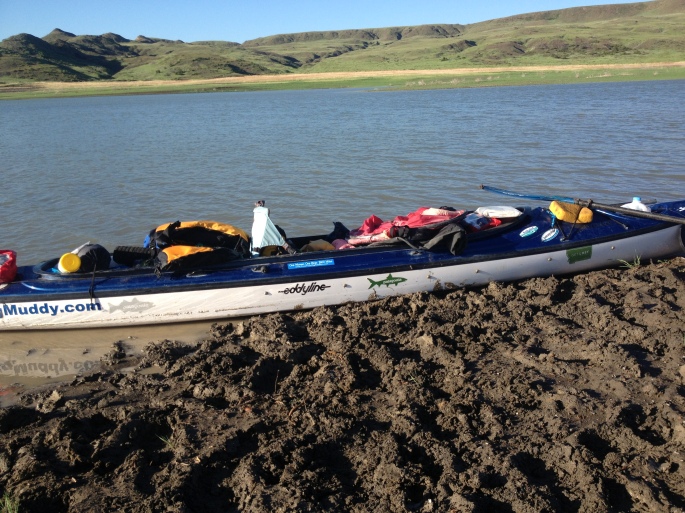 I ended up surviving the storm that packed a major north wind, ripping the tarp off of my tent. I reached out and caught a corner of it just in time to keep it from flying into the water.  The winds flattened the north side of my tent and ripped my tent stake out of the ground.  I had to get the stick four foot that was still on the bow of my boat.  I ran out of my tent and grabbed the stick off of my boat. Thankfully, I had not been struck my lightning.  I secured my fly with the stick stuck deep into the mud. What a relief to have my tent upright again.  Of course, I couldn’t help but think I had just inserted into the ground a lighting rod, which seemed to be the high point on shore, and right outside my shelter.  Oh well, there was nothing more I could do.  I had to wait out the storm, and I did it squatting with only my feet touching ground and my hand on my SPOT “SOS” button.  I thought if lightning struck me, my reflex would press the button.  When the storm ended, I was so thankful to be alive.  I did not concern myself with the two inches of rain that was falling outside.  I was dry inside, and alive. 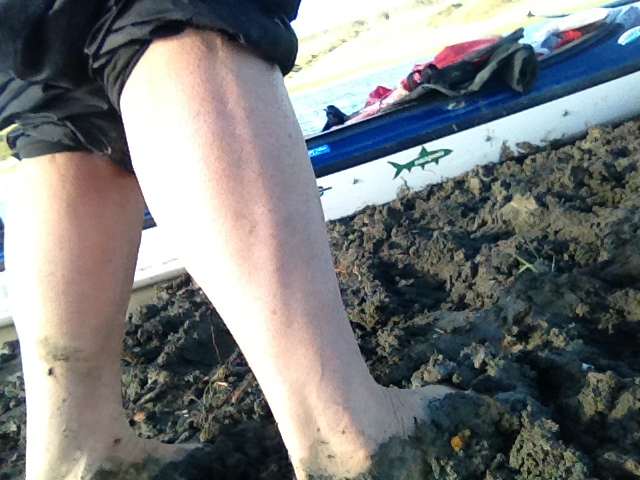 I got out of there at dawn the next morning. I wanted no part of this campsite any more.  I paddled several half-days and eventually made it to the Pines Recreation Area, a location in which Lewis and Clark wrote about as having the first pine trees they saw. I met a wonderful couple, Matt and Carol Williams, and their son and wife, Bill and Tammy. What friendly people. They first brought me watermelon, which was a delicious treat, then later invited me to their camp for steak dinner, wine, and a marshmallow roast. I was so happy to have met these people. They added a warm human social element to this desolated lake leg, and their company and generosity was comforting. I was amazed the next morning when they assembled a cold pack with fresh walleye fish and fruit salad for me to take to fix for dinner that night. We drank coffee together and shared stories before we all parted our ways.

This day was a Sunday, and the Williams family headed home. I ended up waiting out a big wind day just down the shoreline. I met a man while hanging out on the point who was looking around for a mountain lion as tracks had been spotted inside the recreation area. I knew it! This WAS mountain lion country! I was on guard after that, but I came back that night and camped at the same spot as the previous night. This was a first for me, to camp in the same spot two nights in a row. I did not worry too much as calm winds were forecasted for the morrow, and I was up before dawn to paddle my last day on the lake. I woke to a gorgeous orange cloudless sky and glass waters. These conditions would remain all day long. What a wonderful way to end this lake experience. I felt like I was leaving a good friend whom I had gotten to know personally, and for whom I had the utmost respect. Yes, that would be Fort Peck Lake.

Do what you love, and love what you do.