Canadian paddler Rod Wellington passed through Cooper’s Landing last Monday and Tuesday, Dec 17-18.  He is paddling from the source of the Missouri River at Brower’s Spring, MT, to the Gulf of Mexico, all self-propelled.  This is the longest river system in North America, and fourth longest in the world.  Rod will be the first Canadian to paddle the MO from source to sea.  Australian paddler Mark Kalch completed the route earlier this year.

Altogether, Rod will paddle seven of the longest rivers on seven different continents.  The Missouri River is his first.  He has been on the river since June, a total of six months.  His river systems project could take up to 15 years.

After a pot luck dinner and visiting with many interested locals, he graciously sat with me and poured over photos and a map from the Brower’s Spring area, the Missouri River source, to Three Forks, the headwaters of the MO Riv, a 298 miles stretch and one in which I am debating whether to include on my trip. 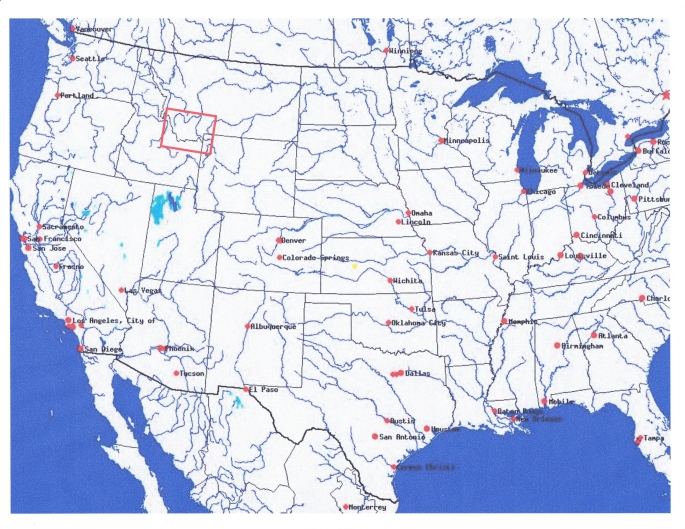 No firm decisions yet as there are a few dicey stretches, like hiking/skiing/snowshoeing over snow for seven miles into Brower’s Spring, and seven miles out.  And, a few days of dodging and portaging around farmers’ barbed wire/electrical/corrugated panel fences which cross a mere 20′ wide water way below the Lima Reservoir on the Red Rock River.  Not to mention that the Red Rock Lakes Wildlife Refuge, located above the Lima Reservoir, is closed in April.

At least now I have a greater understanding of what my obstacles and options are.  I have an unrelenting desire to capture some of that 298-mile stretch for its sheer beauty.  Some of it may have to be biked.  Thanks, Rod, for spending that time with me.

paddling towards the Gulf of Mexico.  However, our first major storm

of the season hit yesterday, the day after he left.  Winds gusted to 50 or 60 mph, and snow was blizzard-like.  One caring and supportive local, Jonathan Lauten, set out to find Rod and make sure he was okay.  He found him across the river below Jefferson City, but was not able to make contact.  We learned that Rod was hunkered down in his tent, warm and dry.

I found him, but I couldn’t get to him!
This pic was taken from a bluff across the river 4:00 12/20/12.
Of course, it was hard to pick him out amongst all those other campers on the Missouri River in a blizzard with 50 mph winds…

Here is a post from Rod yesterday morning, much to our relief:

Dec. 20, 10am – Currently hunkered down in my tent on a sandbar near Jefferson City, Missouri. Outside: blowing snow, sustained winds of 35-40 mph with gusts of 50 mph or more. Unable to keep tent and tent fly anchored. I’ve arranged heaviest gear on windy side of tent to act as a buffer. I’m warm and dry. No paddling today. Expected low tonight: 5F with windchill. Thanks to Steve Schnarr, Gary Leabman, Robin Kalthoff and Jessica Giard for checking on me via phone. Still smiling!

Great meeting Rod and spending some time together.  I think I speak for lots of other folks who met him as well.

You can read posts and watch videos from his trip thus far, and track his current progress on his FB page: “Rod Wellington.”